2 weeks ago I called my mother around mid-day. She was sobbing in pain. This was the day before Mother’s Day. I went to her apartment and spent the next week with her until she died.

I told her that she had done well. She could rest now. Her work was done and she didn’t have to stay. I said that God was ready to row her little boat to another shore. I wrote it down on a card and she kept the card under her pillow.

My mother was 92 years old. It was fairly recently that she spent a month at my home while I took time off of work to care for her after she broke her shoulder in a fall. It wasn’t a surprise she fell or hurt herself- she’s been living unsafely in her home for quite a while. She was very stubborn, though, and did not want to leave her home.

At ninety-two, my mother was not the healthiest of her siblings. Her older brother Ernie was 98 and getting around much better. But then again, Ernie was a preacher and my mother was the family black-sheep who smoked, drank and partied into middle age. Ernie is still active. I expect to see him at the memorial.

She was diagnosed with breast cancer over 5 years ago. She refused treatment or any further diagnostic tests. There was no way to know how extensive the cancer had become. She always said, “I’m tired. I’ve lived long enough. It’s time for me to go.” But she didn’t go. Not for a long time and many close calls.

About a year ago she had congestive heart failure. She needed more help. She was put on hospice care. People came to her home. After a few months she was discharged from hospice because she wasn’t getting worse- she was getting better. She still needed help, she still wasn’t safe in her home.

She was a “wall-walker” as the physical therapists would say. She didn’t have the strength or balance to actually walk around her apartment. She grabbed hold of things- including things that were unstable or that she couldn’t actually “grab” (like walls).  It was an inherently unsafe situation. She was constantly over-reaching her balance and relying on objects that were not dependable to get her a few more steps. This led to falls on numerous occasions- many falls she never told anyone about.

My mother has been alone since 1992 when my father died from complications of mesothelioma. She has been fiercely independent since then. Also, incredibly lonely. She moved out of the family home to an apartment several years ago. It is a great apartment- located in inner southeast Portland off Division St. For a time she insisted on continuing to drive her car. Everyone breathed a sigh of relief when she stopped driving. Deaf and increasingly blind (from macular degeneration) she finally realized that each time she got behind the wheel she was praying that she wouldn’t kill anyone. Her friend Judy began helping with shopping and other things.

This is her obituary:

Margaret Elinor Snook, known to most as Marmie, entered the world on August 8, 1921, the sixth and youngest child of George and Virginia Chamberlain of Corbett, Oregon. She died at home in Portland, Oregon on May 16, 2014.

Marmie worked in a variety of jobs over the years, the longest lasting being as a clerk in the Multnomah County District Court, but work never defined her life. She loved to read, enjoyed just about any card game you could name, played in a Bunco group for decades, and loved spending time with friends and family, often built around food. Garage and estate sales were a passion. She was also a long-time volunteer delivering meals on wheels and working in the gift shop at the Hollywood Senior Center. She enjoyed her life to the fullest, and was proud to have remained independent and (more or less) self-reliant into her 90s.

She was a fun person to be around, with an infectious laugh and a sharp and sometimes silly sense of humor. She was a loyal and generous friend and, at times, a fiercely protective mother. She was also a stubborn person who could drive her friends, and her kids, crazy by insisting on getting her way about absolutely everything. In short, she was a complex, amazing, entertaining and aggravating singularity. The world will not see her like again.

My son Matt loved his grandmother. He visited her often. They played cribbage while she could still hold the cards.

About a week before the day 2 weeks ago that I went to stay with her, she called my sister and said she hurt so badly that she couldn’t bear it. She had an in-home X-Ray that confirmed that she had multiple compression fractures of her spine. She was put on hospice care (again).

When I came over I called hospice and they said I could start administering the liquid morphine that was part of the hospice “kit” left in my mother’s home. The hospice nurse came to see her the next day. They said she might only have a little time left.

She was having great difficulty and pain with breathing. The nurse explained that she would be very likely to develop pneumonia. When asked if she wanted treatment in the event that she had pneumonia she clearly and insistently said, “No.” She wanted to be put to bed and made comfortable, that’s all.

I called my sons on Monday. Matt lives in the area and he came over right away. He jumped into bed with his grandma and hugged her gently.

Over the course of the week several things happened.

By Wednesday she was much weaker. She could not walk at all without help, although she tried. The following morning she got out of bed and had a muffin and some tea. She had been cranky with me earlier and she apologized. She went back to bed. She never really got back up (she tried at one point after the hospice nurse had helped change her diaper- but she was weak, disoriented and couldn’t stand… she went back

The nurse said it would probably be very soon.

That evening, in her sleep, she began to make gurgling sounds when she was breathing. There was a thick foam in her throat. I called the hospice nurse. She said it was “end  of life secretions” and to give her atropine, 4 drops, from the hospice kit. I tried first to suction out the liquid with a big dropper, I put her on her side- eventually she stopped making the noise but the secretions were still thick and visible in her throat.

The nurse had said that the atropine would stop the sounds- she also called them “death rattle”- but that the sound didn’t mean my mom was suffering. She said the atropine was primarily for the comfort of the caregiver because the sound can be distressing to loved ones.

I set my alarm for 2 am so that I could check on her. When I got up and went to her room I could tell she was gone. I felt her head. I put my hand on her chest, I picked up her hand and held it. She was free.

I called my oldest sister and woke her. She said to wait until morning to call the others. I did. People started coming over at about 8 am. We spent the next few days going through her stuff, figuring out what to keep and what to give away. She had love letters written by my dad when he was in the navy, overseas. Came upon this little poem written by my dad: 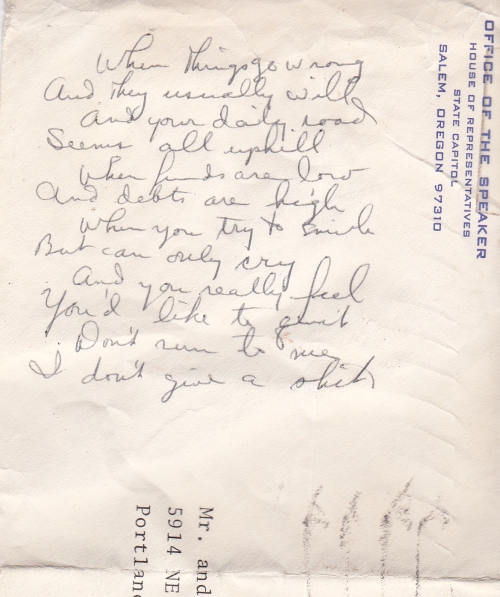 It was written on an envelope he received in reply to a letter he sent to his congressman.

My guess is that he didn’t care for the response.

This is only the husk. The fire that burned here is gone. It may be burning someplace else, I don’t know; but the fire here has gone out.

I see my own death in this- all of us are destined to lose everything we hold dear, even our lives. There is no way out of this. Time will burn us all to ashes.

The past week I have been very reflective. I have thought a lot about my life, my family, my relationships.

What will be left? What is true, lasting? Anything? Any Thing?

Not our bodies. Not our conditioned personalities formed and re-formed in life. None of this really exists except in a flash- passing before we can even perceive it. What is the reality behind this waterfall we seem to live in, this dreamlike world of change, birth, death? I know what the Wise have said. I know what the sacred scriptures say.

I don’t believe I am capable of knowing what is true. I leave that up to God.

Tagged as pictures, The Great Love