News from MindFreedom and the Bend Weekly News

A State of Oregon study says that Oregonians in the mental health
system die earlier than the general public.

Bend Weekly News in Bend, Oregon, USA covered this news in the below
story, which includes a link so you can download the State of Oregon
study, “Measuring Premature Mortality among Oregonians,” published 10
June 2008.

Oregonians with serious mental illness are dying years earlier than
their neighbors in the general population, and a grassroots health
movement is under way to reverse this trend.

The Oregon Department of Human Services Addictions and Mental Health
Division (AMH) has teamed with consumers of mental health services
and their families, health care professionals and others to implement
a statewide wellness initiative aimed at improving mental and
physical health and longevity.

Death comes before age 50 for one third of those treated for mental
health problems, according to results of a seven-year AMH mortality
study. A staggering 89 percent of people treated for both mental
illness and substance abuse die before age 50. The average lifespan
of someone who is dually diagnosed is 45.1 years, which equates to an
average 34.5 years of potential life lost.

The early death toll among this segment of Oregonians falls in line
with similar results from national and state studies. More
importantly, it brings into focus what many individuals with mental
illness already knew; by taking charge of their health, habits and
lifestyle they can add years – and quality – to their lives, said Bob
Nikkel, DHS assistant director for addictions and mental health.

“National research and this study make it clear that persons being
treated for substance abuse and mental health problems have many
risks that may bring on early death,” said Nikkel. “Our most critical
imperative is to help individuals with mental illness live better and
longer lives.

“Mental health and substance abuse is an important quality of life
issue for Oregonians,” he continued. “Dying prematurely not only
destroys human potential, but it has an economic impact as well.”

The AMH study showed substance abuse and mental health clients have
higher risks of death associated with suicide, homicide and
unintended injuries. In addition, they are economically disadvantaged
and vulnerable to many diseases that cause death. For example,
antipsychotic medications used to treat someone with mental illness
are known to elevate the chance of dying from cardiac arrest; others
may lead to diabetes.

The mortality study is available on the DHS Web site at:

Nikkel said a DHS/AMH wellness committee is working to improve the
health and longevity of people with mental illness by drawing on
scientific research, literature and successful practices by user
groups. Here are some of the committee’s guiding principles:

*** We must treat and support the whole person;

*** Access to a range of health care options and basic health care
must be afforded to all Oregonians;

*** Early intervention and prevention across the lifespan saves
lives, makes a difference in years of productive life lost, and
improves quality of life;

*** Medication management and empowerment equips individuals with the
tools and strength to ask questions and work with treatment providers
to find healthier and effective ways to support recovery and
wellness; and

*** Disparities in health care coverage and access to service must be
overcome, along with finding culturally appropriate treatment programs.

Committee members are seeking funding for grassroots-level programs
that encourage education and lifestyle changes and for peer-to-peer
support services.

For more information visit the DHS wellness Web site at:

On a different note-

Talking with my guests at KBOO radio last night we got into a discussion of stories we all had from psychiatric hospitals, some funny, some not and different experiences we had with mental health providers. I think Ann had the idea that we need to have a “secret shopper” project; people could go to various agencies and then provide reviews of the services, respect and treatment they receive. We could then publicize the information to produce a guide that would be useful to folks. A related idea was that we should collect current information regarding services and treatment at hospital psych wards. On the air we got into a discussion about the relative merits of Portland area acute care facilities. Conclusions? We agreed that, at least before their remodel, Adventist was the worst place to stay but had the best food. Our choice for best local facility (as if anyone ever has a choice) was Providence NE. We also agreed that the showers at St Vincent’s leak and flood the rooms.

We had a great time on the program and gave away tickets to the National Air Guitar Championships being held at Dante’s in downtown Portland. The winner was chosen from among callers on the basis of how many diagnoses they had been given. A good time was had by all.

He’s drawing pictures on the sidewalks of San Francisco.

The first tadpole crawled out of the water last night at about 11 pm. Won’t be long before they all head off into the world. Sniff. 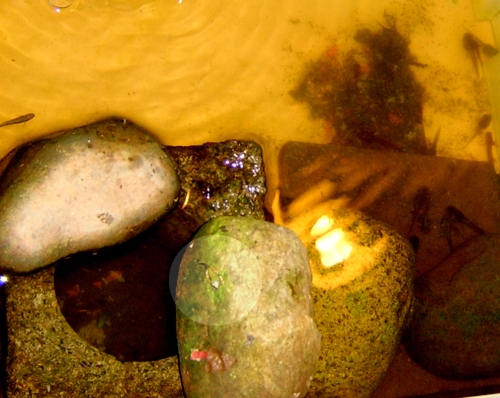