Getting the announcement part out of the way, tonight is Mad Liberation by Moonlight at 1 a.m. PST on KBOO, 90.7 FM in Portland, Oregon. Streamed on the web at http://www.kboo.fm/. It’s a call in show, blah blah blah, call in at 503-231-8187 to be on the radio, read other posts about it here. Archived shows are found on the MLBM tab above.

West on the Springwater Corridor trail near my home- On the left (south side) is a marsh. On the right (north) are a series of ditches that collect water and keep it for a bit until mid June or so. This is one of several places I monitor for amphibian eggs and relative potential for supporting polliwogs through their transformations.

Marsh on south side of Springwater Corridor

Picture with hard-to-see newt tadpoles as of last week

The marshy area stays pretty moist and frogs that spawn there can expect their babies to grow up unless they’re eaten by birds or some such. The ditchy area is iffy. Eggs there will hatch- the ditch pools will fill with tadpoles- but the puddles will mostly dry up before the frogs can mature.

Lots of froggy love goin on- look at all that slimy frog spawn!

The marshy area also has a healthy population of newts- gilled newts that look like this as they are changing:

The frogs I’m talking about are basic pacific tree frogs. They are brown to green ion color and start out very small and stay just a bit bigger. The newly transformed froglings will be about the size of your thumbnail. Or smaller. Fully grown, 1 or 2 years old they may be the size of your thumb. This presupposes that they survive tadpole-hood.

Hey little fella/ gal/ whatever you are

The ditch puddles are still quite moist. Too wet and muddy around the edges for me to get close enough for you to see the tadpoles. But they are there- here’s a picture I took last year of  one I brought home to mature:

Newts also spawn in these ditches and most don’t survive. I’ll get some of them, too. With the newts, I have to take them back out to a place like the marsh when they’re ready.

The frogs just hop out into the world. Usually 90% of them will take off in one day from the tank on my back porch. 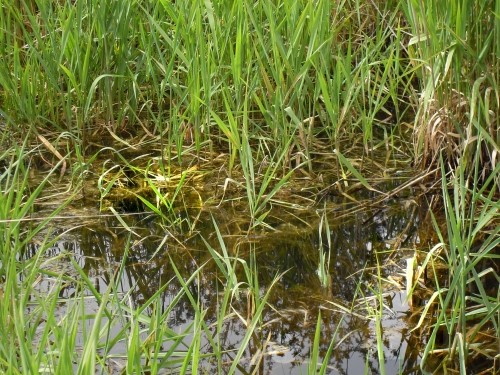 My annual hobby/ mission involves finding places like this that serve as marginal habitat- attractive to frogs in love (blush) but generally not capable of sustaining their babies. I find several spots near home. Powell Butte is one of my favorites but the marginal ditch I find them is messed up this year due to construction of an underground water reservoir.

This is a picture from Powell Butte, pre-reservoir. 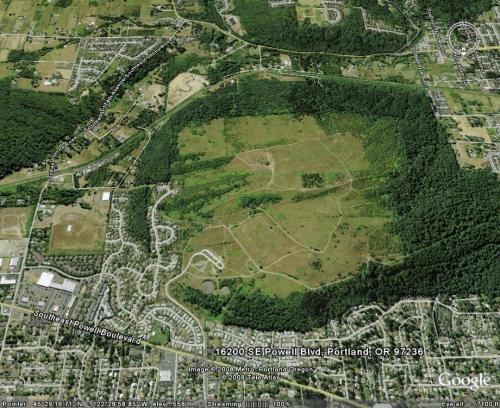